Where is the Wealth?

New Zealand’s slide down the OECD rankings in terms of per capita GDP is relatively well known. Also well known is a variety of anecdotal reasons why this is happening, and even more on what should be done. Surprisingly little robust analysis seems to be available on the matter. Where statistics are quoted they often seem to be misused to reflect the personal predilections of the commentator rather than necessarily being compelling statistics in isolation.
Figure 1 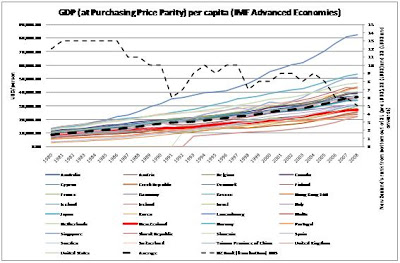 Source: International Monetary Fund World Economic Outlook Database (IMF)
Figure 1 above shows the decline in New Zealand’s relative performance since 1980. The group of countries in Figure 1 is the IMF Advanced Economies grouping rather than the OECD but the point is still obvious. New Zealand was close to average in 1980 and was ranked just below the middle of the group but has steadily dropped to well below average and now only beats four advanced economies (the Czech Republic, Malta, Portugal and the Slovak Republic).
In my desire to try to find the ‘truth’ about New Zealand’s decline from the facts I discovered what is intuitively obvious, that the issue is complicated. Ultimately the truth of such a matter will only be found by examining the matter in full daylight and with the opportunity of many minds to contribute. The contribution of many minds doesn’t necessarily discover the truth, this occurs every day in most newspaper’s websites and other blogs, and seems to mostly yield a complex picture of emotions rather than much in the way of evidentiary fact. Therefore my desire is to try to distil the emotion away from the debate and establish instead intellectual principles underscored by evidence.
A wiki first seemed like the best approach for such an objective, given a wiki’s principle design is around citation and sources, but a wiki is fundamentally editorial and not a debate per se. So, a blog it is, but hopefully one that is guided to rational debate and evidence.
Where to start?
I had first hoped to start with a stunning piece of analysis that sets the ball rolling immediately but the complexity of the matter precludes this, and the data isn’t always obvious or available, so instead I am starting with what I have and am looking to continually refine the view; hopefully with the help of like minded people with something to contribute. Anyway I will outline my first theory and then we shall see how well I can defend it empirically.
I start with the Fundamentals to give a foundation for the ‘building blocks’. I also start with a fundamental assumption that New Zealand is a developed economy. It may be going relatively backwards but it is developed. In the Fundamentals I reason that, ultimately in the long run, no country will be able to achieve a level of wealth greater than its available physical resources, which once fully developed only grows as a function of technology. I propose that countries can ‘punch above their weight’ but only for a limited time. Finally I point out that average individual wealth is a function of not only the numerator (the number being divided - GDP) but also the denominator (the number used to divide – population). A larger GDP divided by a larger population results in a smaller increase in GDP per capita.
I then ask the question “Are we more productive?” I raise this question because my hypothesis is that growth in GDP in New Zealand is driven entirely by population driven consumption and, being fundamentally unproductive, is financed by debt. I therefore present some evidence that New Zealand’s GDP growth is funded (net) by external capital (significant direct investment but mostly debt); and once economic growth is normalised for this foreign capital then the portion of the productive economy hasn’t been growing for a very long time. This assumption follows from the principle that productive growth (in the long run) produces economic surpluses that are at least self-sustaining (ie only require short term debt at most).
The third part of my hypothesis considers the Role of Population. Under the Fundamentals I raise the point that increasing population puts downward pressure on average individual wealth unless wealth is growing relatively faster. However, a growing population doesn’t necessarily explain why productivity isn’t growing well. This section also explores the components of population growth and identifies that New Zealand is able to choose the level of population growth that it experiences.
The fourth section looks at the way in which countries can achieve relative advantage due to the time it takes for wealth and technology to spread across the globe. However, New Zealand doesn’t seem to have benefited from this to any great degree and raises the point “Our timing also seems to be wrong”. This section doesn’t come to any firm conclusions for why this might be the case except to consider whether this was a function of an absolutely small economy when we were relatively rich. This section also considers that we enthusiastically adopt consumer technology but don’t seem to adopt productive technology.
The fifth section summarises my theoretical position on “Where is New Zealand?”
The final section (What can we do?) starts to suggest a way forward on this complex subject. It proposes that the problem is very complex and that there are no easy fixes. The section agrees with those that claim that our current consumption is unsustainable and must, sooner or later, change. The only practical suggestion put forward is that we need more honest and robust debate on the issue and that, ultimately, there will need to be some tough decisions made.
Posted by Headitor at 7:33 PM