Are we more productive?

The statistics show that New Zealand’s GDP has been growing but an economy can grow in many ways. If the growth of an economy is sustainable then it should, allowing for short term fluctuations, generate sufficient economic surpluses to substantially self fund further growth. In theory we should see that, for a sustainable economy, if we subtract the net international investment position (the net amount of capital that is brought into a country to fund growth) from GDP then we should still see growth. The extent that foreign capital is required to fund growth indicates the extent to which internal growth is not productive (ie generating economic surpluses).
Figure 2 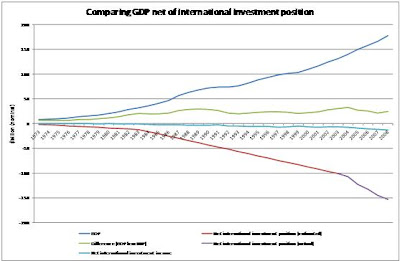 Original data source: Statistics New Zealand (www.statistics.govt.nz)
Preparing Figure 2 also highlighted a significant problem with assessing problems in New Zealand. The data can be very hard to find and even harder to compare. As can be seen some of the data above was not readily available and some was estimated. The portion of the “Net international investment position” that was estimated was done so by keeping the likely returns of the estimated curve broadly consistent with the actual data of the “Net international investment income” series and the general shape of the curve consistent with the actual data series “Net international investment income”. There is little doubt that this introduces quite a lot of error into the derived series “Difference (GDP less NIIP)”. However, the curve is credible and cannot be sufficiently in error to prevent reasonable conclusions, which are also adequately demonstrated by the actual data from 2003.
Net foreign investment in New Zealand has been growing as fast as GDP, while the difference between them has been fairly constant. This suggests that all GDP growth since about 1983 has been funded by the importation of capital, mostly through debt. The difference, the suggested GDP contribution not funded by importing capital, ie generated internally, has not been growing. Our GDP appears to be coming from debt fuelled consumption. The cost of this debt the “Net international investment income” is growing steadily as well and is already significant compared to the piece of the economy that might be considered sustainable.
Posted by Headitor at 7:30 PM