Debt may not be such a big deal

There has been a great deal of news and discussion around New Zealand's debt. This is also a significant feature of my September 2009 "Where is the wealth going?" series. Now, however, I am not so sure that debt is the problem that I first thought.

In an attempt to understand the place of debt on the relative performance of economies I went searching for more data. One of the best sources for data, which I found somewhat surprising, is the CIA's information site. Interestingly the CIA has more useful information tabulated in one place than can be easily found on our own government website.

I have used the CIA information to try to normalise debt for population. A table of the results is displayed below: 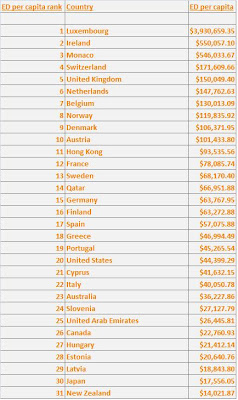 The source is the CIA world factbook and ED (External Debt) is "This entry gives the total public and private debt owed to nonresidents repayable in foreign currency, goods, or services. These figures are calculated on an exchange rate basis, i.e., not in purchasing power parity (PPP) terms." ie US dollars. The population numbers are taken from the same site as of today.

The timing of the data isn't quite right but this would only introduce at most a year's growth worth of error, about 1-2%.

What is clear is that debt on a per capita basis doesn't seem to be a factor in prosperity. Although the above table includes a number of countries with poor current account balances (including New Zealand) it also features countries who have very strong economies, such as France and Germany.

It still seems to me that the problem with New Zealand's economic performance is likely to be a fundamental mismatch between consumption and production; and debt seems to be a factor in our consumption. Nevertheless, debt may not be the primary cause of concern.

What is strange is that it is quite difficult to find statistics that directly compare productivity and consumption. Most measures of economic prosperity, such as GDP, treat them as equivalent. Admittedly consumption drives production; and this must be true globally over time. A single nation can develop consumption without production, though, and this combination is not good.